Red Square
Many readers have asked us how come Lenin's Earth Day resurrection passed unnoticed by the mainstream media. If it wasn't covered in the New York Times it never happened. The bloggers remained silent as well. Some doubted the veracity of our statement because in this day and age all people have cameras. They litter the blogosphere with digital images much less significant than the rebirth of the Great Leader of the Toiling Masses.

Oh well. Here goes our first installment of the life and deeds of the Great Lenin risen in the year of 2005.

Shake those chains, rattle those cages! Note to self: I'm escaping through the back door of the most valuable piece of real estate in all of Russia. Is freedom really worth this sacrifice? But who cares about individual freedom if the freedom of millions of toilers is at stake? Besides, I can always go back. I think. 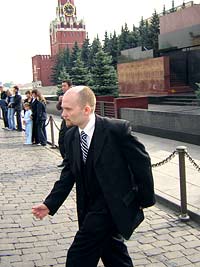 I must walk as if I'm just a regular human, not the Great Supergenius with superpowers who has spent the last 80 years on public display in a glass casket. 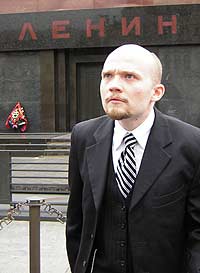 Where are all the agitprop posters? I clearly remember the one that said, "Communism equals the Soviet power plus the electrification of all of Russia." Have the capitalists taken back the power? Do I need to start giving light bulbs to peasants all over again? 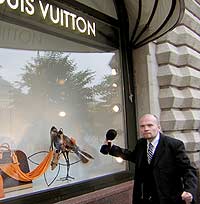 Louis Vuitton? I knew it! The bourgeois filth is polluting the pure proletarian consciousness in broad daylight! Comrade, give me that brick! 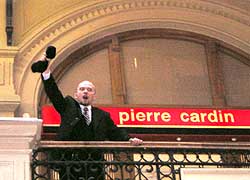 Peace to the shacks, war to the palaces! We must burn down this decadent mall! Workers and peasants! Hello? Anybody? 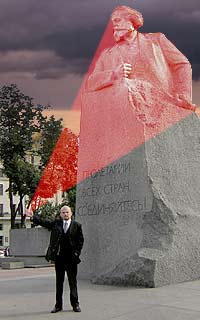 Time to use superpowers and summon Karl Marx for consultations! 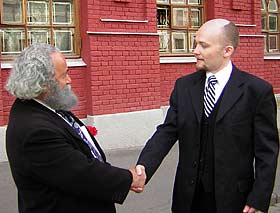 Karl Marx extends a helping hand. However, upon a brief examination of history of Marxism in Russia and the world at large he apologizes and asks to be put back to grave as soon as possible. 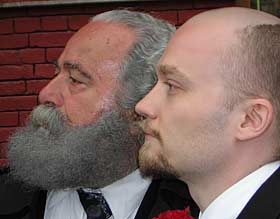 But first - a snapshot of two Great Leaders in preferred communist position for ThePeoplesCube.com 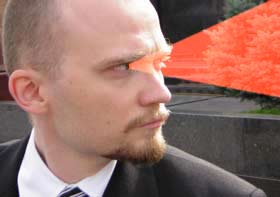 You can't trust anyone these days, even Karl Marx! Maybe I should just summon another instance of myself! 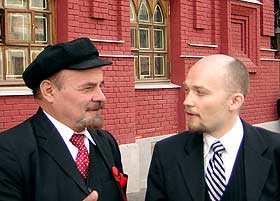 What does Lenin say to another Lenin when they meet in the time-space continuum?
"My mummy can beat up your mummy!"

Just kiddin', Vladimir. But seriously, remember what Herbert G. Wells told us in 1920 in the Kremlin as we discussed how time travel could help the revolution? He said, meeting your own self while traveling in time can be fatal. But hey, would you trust a Marxist? My guess is as good as yours. 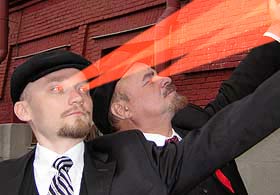 Screw the time-space continuum! It is a purely bourgeois concept invented to keep the masses at bay! We'll keep summoning more of ourselves until we have an army of Great Supergeniuses armed with superpowers! 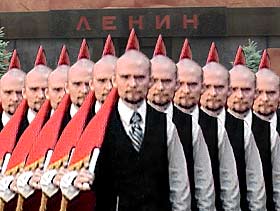 You thought the Matrix Revolutions was awesome? We'll show you what real revolutions look like! 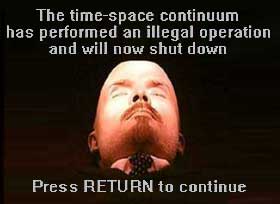 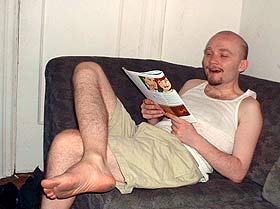 Quite unexpectedly Lenin finds himself on a couch in a Brooklyn apartment, reading Nintendo Magazine.


Premier Betty
I much rather preferr the Play Station 2 over Nintendo. And with the soon to be released Play Station 3, Sony will have beaten the living s#$t out of Nintendo.


Anonymous
Playstation 2 is capitalist evil!  Revel in Nintendo's Gamecubiness!  For the Gamecube IS the People's Cube!


Commissar Vladimir Ivanov
Note to our great leader:
Sir, I believe that "Nintendo" is a destructive capitalist object aimed at capturing our fellow comrades' hearts from enjoying what truly is important in the people's society.  Might I suggest a magazine from Red Journalism Headquarters?  I also have a few spare People's Cubes if you need any.


Proskrebychev
Unlimited Lenins! Everyone is playing computer games instead of toiling in the earth! Hand me a spade! Digging is much more fun than playing capitalist mind-control machines.

That said, i am currently typing this lecture on such a tool.

Hand me a spade.


O'Neill
Time-space continuum? If you'd been listening, you'd know that nintendos pass through everything.

You will do as you are told, and report back to the SGC immediately.  If there are any weapons for us to find via the SGC program, we will use them for the revolution.  If you resist, I must insist you report to the nearest re-education center immediately.