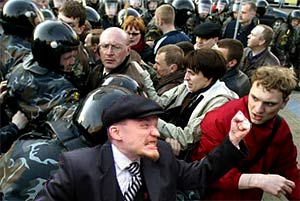 Have you beat up a protester today, comrade?

We can tell you privately on condition of absolute confidentiality that Comrade Lenin is currently traveling in Belarus collecting information on the successes of building communism in this last Soviet stronghold of proletarian dictatorship.

Judging by this news, progress is being made every day as more enemies of the people are getting arrested. Remember, the fewer people remain at large, the bigger slice of the common cake each one will get. That alone is a good incentive to denounce counter-revolutionary neighbors and colleagues.

We thank comrade Kommentariat for the tip. You can count on your ration card when the revolution comes!

MINSK, April 27 (Reuters) - A Belarussian court on Wednesday convicted 30 people for taking part in a rally denouncing President Alexander Lukashenko this week and sentenced them to brief jail terms of up to 15 days.

Police dispersed 300 demonstrators on Tuesday who had gathered on the 19th anniversary of the world's largest civil nuclear disaster at the Chernobyl nuclear plant in Ukraine, which also contaminated about a quarter of Belarus.

You can now read regular updates on the situation in Belarus on Lenin's own blog!


Premier Betty
Why dosen't Lenin just deploy his beam of superior Marxist consciousness to convert the ideologically unstable elements? After all, Ivan Lenin did it when CFK took over the Republican Convention. If Ivan Lennin can do it, why can't Vladamier Lenin do it now?
(Although I do admit that punching the living crap out of inferior protesters is very fun and good for relieving stress.)


Prolaterian Equalizer
Komrades, i am pleased after returning from a long re-education leave to see the great Lenin fighting off the filthy capitalist masses


Comrade_Smirnoff
How ungrateful can you get? These people make me sick! It just shows you the indefatigability of bourgeois false consciousness. 50 years of utopia and they STILL want to go back to the bad old days of dog eat dog capitalism. When will they learn?

Since the collapse of the Berlin wall, and the mass exodus of Westerners into the former Soviet Union, there has been a marked rise in civil disobedience. I suspect that it’s all being organised by bourgeoisie infiltrators.

We must re-erect the wall to protect the proletariat from these Fascist saboteurs!


Premier Betty
To the Gulaug, oops, I mean to the re-education camps with all of them!


Commissar Vladimir Ivanov
Are we using the capitalist propaganda "Reuters" to tell us what happened in Belarus?

Speaking of mean left hooks, I've seen our great leader spar with some of our fellow comrades (it was a great honor, let's say).  They didn't make it.  Lenin KOed them within the first round, even if it was sparring.

We shall rise again.  Comrades in Belarus, let's win back our nation...the people's nation!


Man of Steel
Even with a degenerative brain disorder, the old man can still pack a punch. Must have refined his technique into a reflex during his misspent youth as a nobleman . Nice to see that Comrade Lenin still knows how to put some action into his "direct action".

RGQFAksBiM (I think this is an afgan name) has posted the reason why our glorious revolution must triumph!

Only the decadent bourgeoisie and petite-bourgeoise could think that capitalism extends to sex.  These running dogs have no shame and attach price tags to everything.

all true revloutionaries know that in the joyous proletarian dictatorship all brothers and sisters share thier bodies along with thier cabbage without judgement of sexism, lookism or specisism.

Using the new and improved Google, the NVIK can find this filthy capitalist.  then we can all view a web site that shows him shifting permfrost in the twilight of the Glorious Golden North.

I think we should let him obtain his own shovel.


one ping only
Workers!

Our comrade, Red Square, has correctly indicated that my last post was off topic.

My thoughts, no, no, no, the collective action letter! in the best emulation of VI Lenin! was merely to parrot the hollow sex crime of all capitalists!


Regarding the glorious pix of Lenin. Please note Comrades;

- Lenin attacks the youngest and strongest of the counter revolutionaries

- All other Protectors of the Workers are using shields, helmets and good, strong, large sticks. Lenin, only recently re-animated, employs the bare left arm of the proletarian dictatorship and wears only the "hat".

- Notice who is two (2) persons from our Glorious Leader. Is that not one the Great Ememies of All Workers? Is this not the yankee running dog who calls himself the elected Vice President of Amerika?

He is there, no doubt, to obtain the free health care provided to all.


smersh
LENIN. I HAVE SOME GREAT VEDIO OF YOU HEALING A PROL. ON UNION SQUARE


rake
[html]alive and kicking! viva le Lenin!
those puny protesters in Belarus havent see it coming did they!? muahaha the party prevails again!
Lukashenko got his back covered!
http://www.greyforums.net<br>http://www.pigeons.biz[/html]
All times are UTC-04:00
Page 1 of 1
Powered by phpBB® Forum Software © phpBB Limited
https://www.phpbb.com/